A Day in the Life of the Texas Daytripper 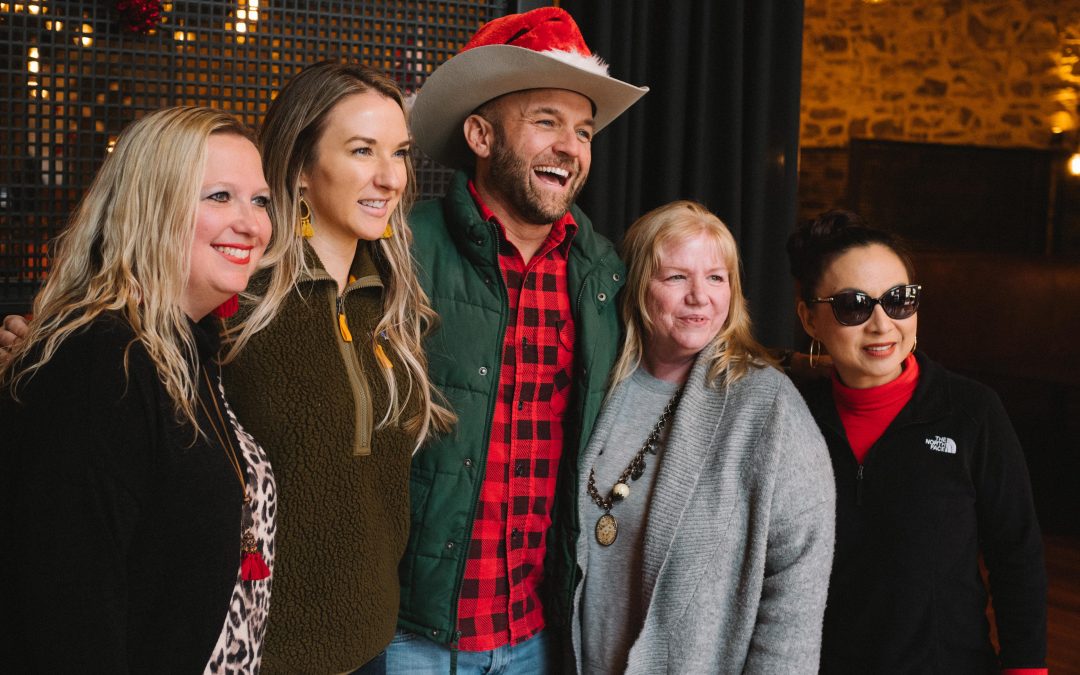 This year the 8th Annual San Saba County Chamber of Commerce Sip N’ Stroll and Lighted Christmas Parade had a special guest. Chet Garner, known to many as “the Daytripper,” was invited by the San Saba Economic Development Corporation, Found, and CTTC to spend the day in San Saba for the wine tasting, shopping, and parade, as well as the lights at Mill Pond Park. We spent a portion of the day with Chet and wanted to share a little bit of what it was like to experience our favorite event of the year through his eyes. 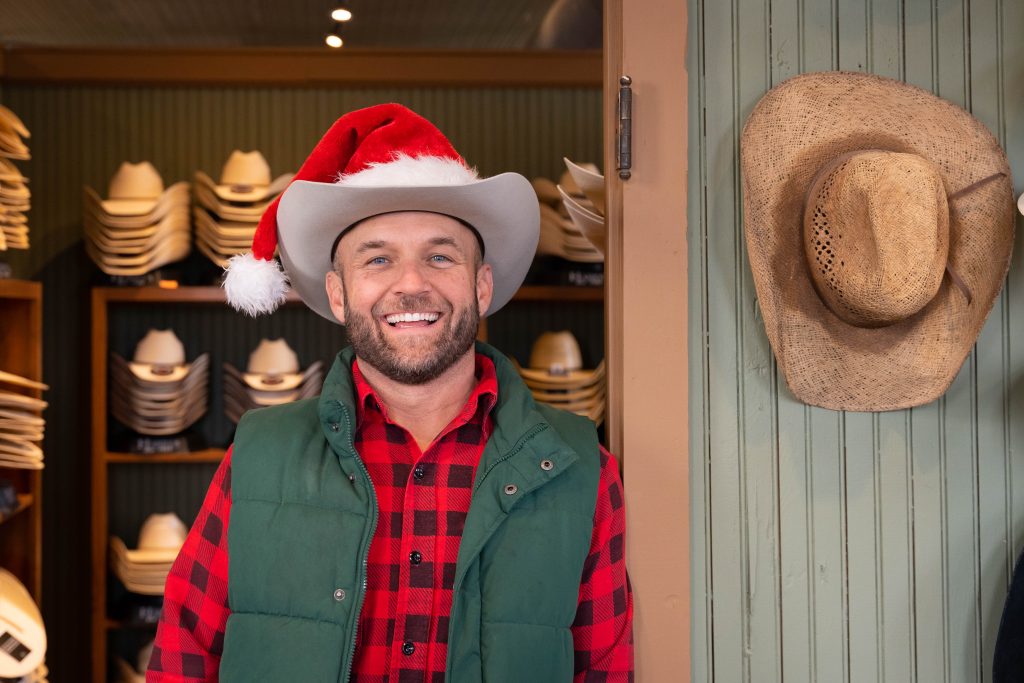 Almost Not a Daytripper

Before we get into the visit, you might be interested to know a little bit about Chet. Born in Comanche and raised in Port Neches, Texas, Chet’s love for storytelling began at a young age around the Boy Scout campfire and toting around his grandfather’s VHS video camera staging elaborate productions in his backyard. Chet earned a degree in Radio-Television-Film from the University of Texas at Austin and went on to graduate first in his class from Baylor Law School. 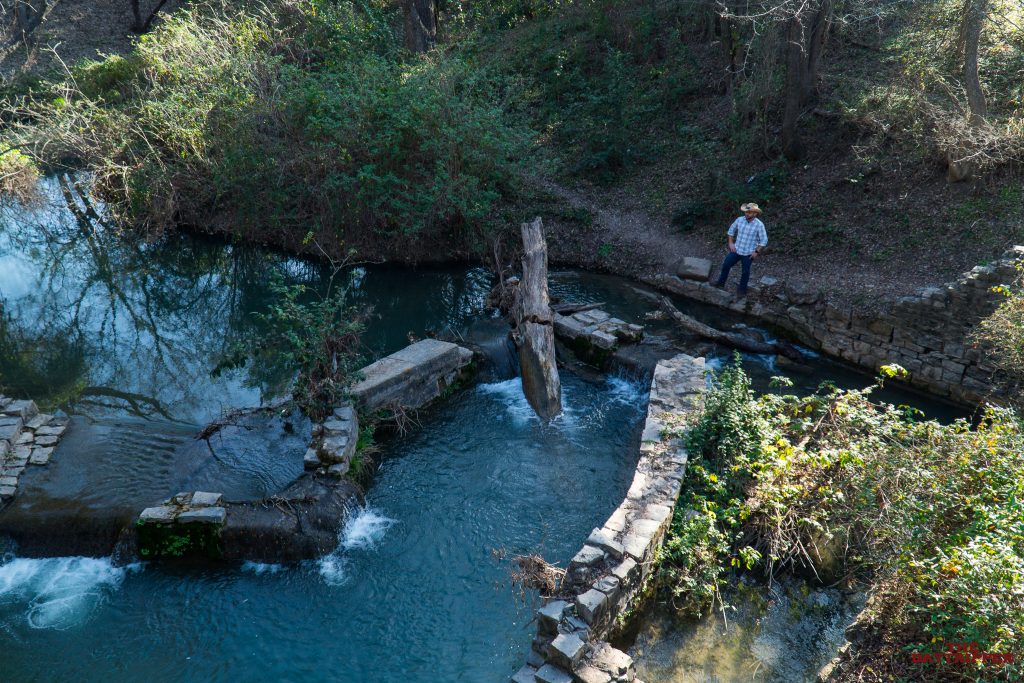 Chet will be the first to try to convince you that he is not famous, but he definitely has a very loyal and adoring audience from his 11-time Emmy-Award-winning travel show, The Daytripper, airing on PBS stations across the country. People always want to know how he got his job. After all, most of us view it as just about the most perfect job you could have to visit Texas towns and talk about all of the fun and interesting things they have to offer. To hear Chet tell it, he was not happy after three years as a lawyer, so he tried to figure out what kind of career would be the exact opposite of what he was experiencing as a lawyer. He decided he wanted to travel and explore Texas, and he knew at the time that PBS would support local access TV shows, so he decided to shoot a pilot. The rest is history. 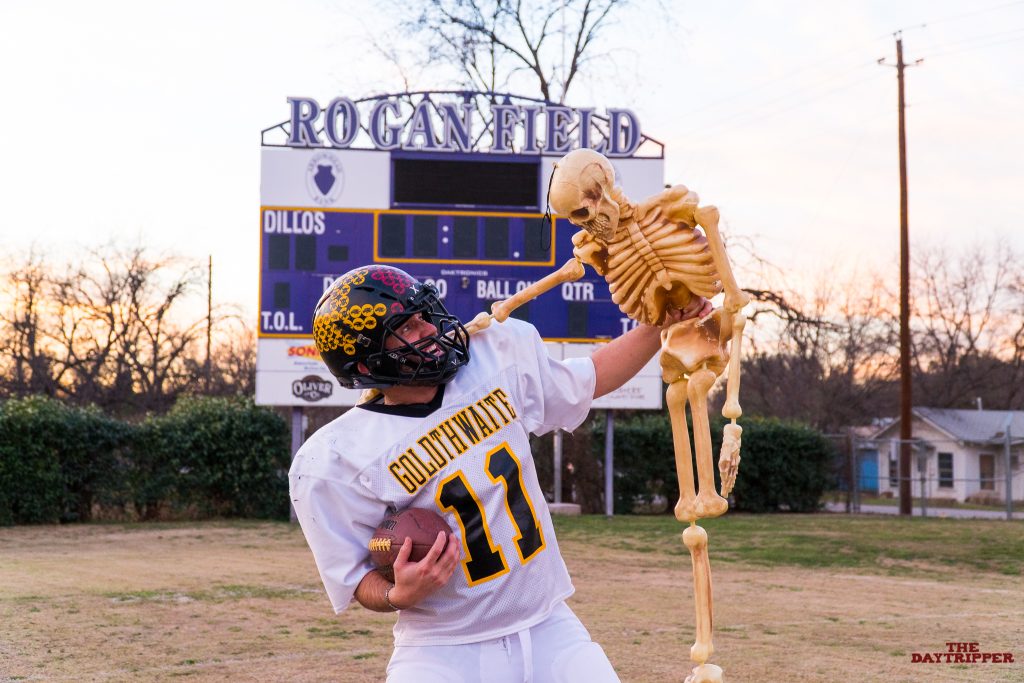 It’s All About Texas

If you have ever watched the show, you will know that Chet is very knowledgeable about Texas. He does his homework, but he is also prone to goofy, comedic scenes, and costumes that let you know he is just having fun. Chet told us he loves to promote local businesses and small towns, but he is very selective and will not promote something that he does not personally approve of being on the show. His sponsors, brands he promotes, and uses are all from Texas when possible. Chet is a huge advocate for small businesses in Texas, as well as entrepreneurs, and the rejuvenation of small Texas towns. He is also a regular contributor as a writer to Texas Highways Magazine. 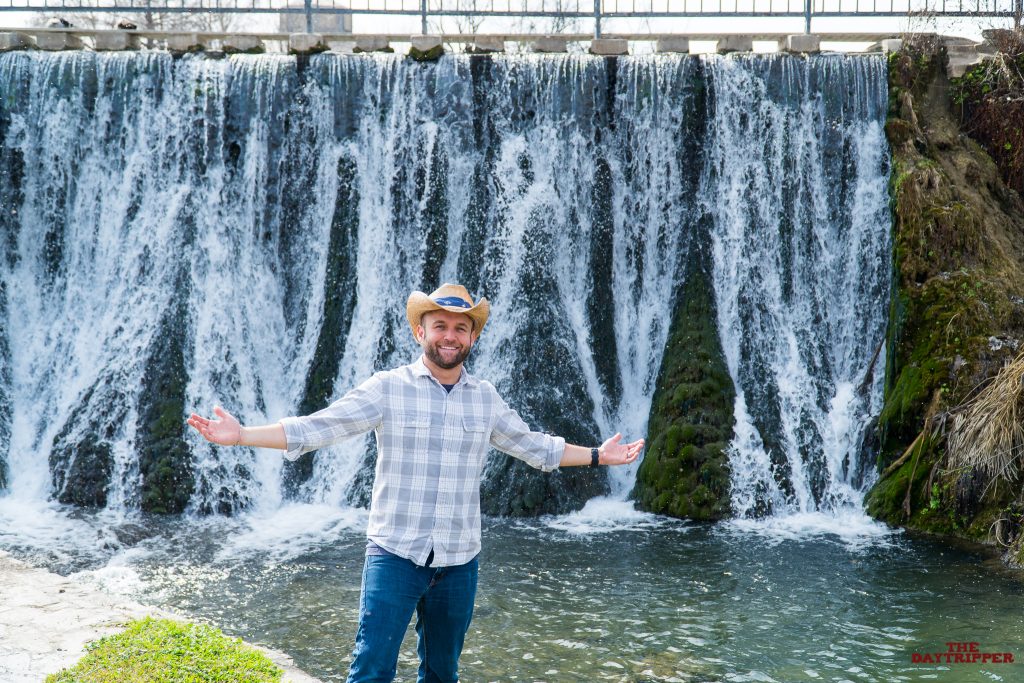 The Show’s Impact on San Saba

When Chet filmed an episode of his show in San Saba in 2017, the city was excited and curious to see how it would turn out. Once the show debuted, our local businesses noticed a swift uptick in foot traffic and visitors wanting to visit the exact same places that Chet highlighted in the show. There was no question that Chet’s visit had a big economic impact on the city and its businesses, and we were excited to have him back again for our biggest event of the year. 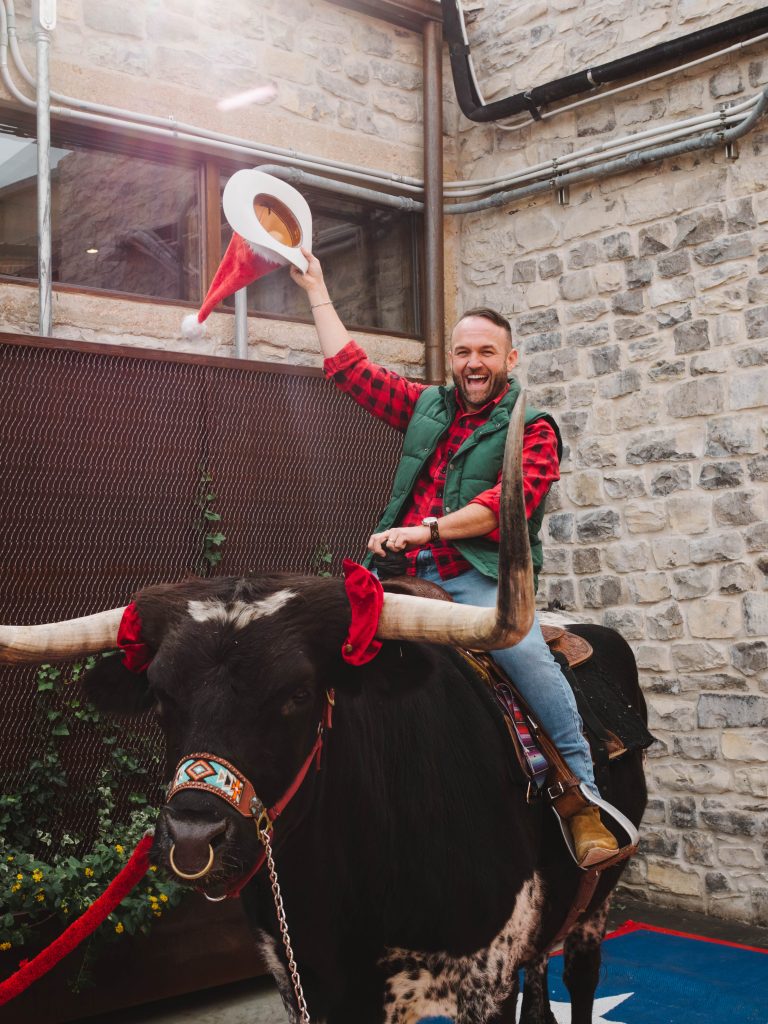 “San Saba, Those Are My People”

Chet started his visit to San Saba with a quick stop at Pepperbelly’s to sample some of their menu, and he came away raving about the handmade tortillas. We then joined him at Pecan House Grill where he held court with locals and visitors for a couple of hours taking pictures and swapping stories about the cities he has visited, favorite destinations, and where to get the best bbq. After the Meet and Greet, Chet joined the Sip N’ Stroll to sample wines from the eight Texas wineries set up throughout downtown San Saba. We were also able to knock off a bucket list item he did not know he had, which was riding on a Texas steer at Harry’s Boots. He was constantly greeted with people yelling his name, saying hello, and asking for selfies. After visiting half a dozen businesses, including a fun visit to new local business, Bard and Hallow, it was time for Chet to make his way to the Keep San Saba Beautiful float for the Lighted Christmas Parade, where he was joined by two of his daughters to ride along the parade route. After the event, Chet told us that, “San Saba, Those Are My People.” 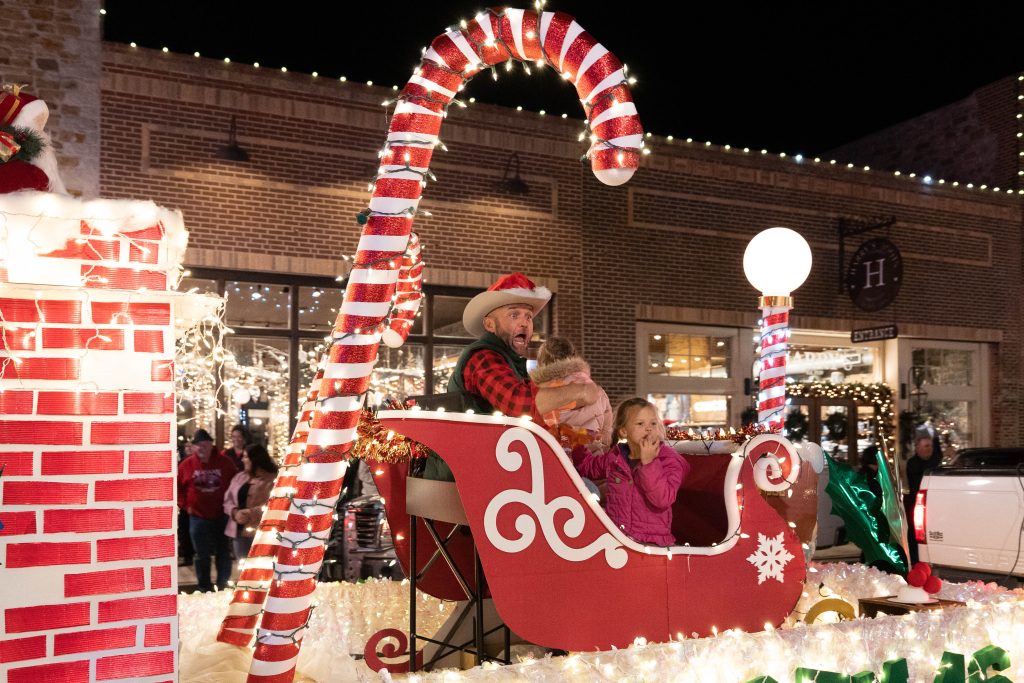 A Great Way to Kickoff the Holidays

During the Sip N’ Stroll a number of local businesses broke sales records and had a wonderful time kicking off the holidays. Chet and his family made one last stop on the way out of town to see the Dancing Lights at Mill Pond Park. We loved the fact that Chet was smiling ear to ear throughout the day at every stop, for every photo, and at every event. It meant a lot to our community that he came back to visit, and we are also thankful to CTTC for sponsoring the visit. When not traveling Chet and his wife and 5 children call Georgetown, Texas home. You can also visit The Daytripper World Headquarters in downtown Georgetown. Chet will be hitting the road again this Spring to film new episodes you will be able to check out on PBS. In the meantime, you can learn about all things Daytripper at thedaytripper.com.